Alright, pretty chill news coming out from the boys over at Fender. When I first saw the news I laughed, as Apple already has a pretty extensive reach as far as different technologies they cover goes. Originally, I saw the reports and was planning on writing a blog post bashing the idea. I thought it was just plain dumb. Once I checked out some of the videos, however, my mind was changed. Squier has just released a USB guitar that allows musicians to plug directly into their computer and record.

The Squier USB Stratocaster by Fender is a true mark of convenience for the recording guitarist. The USB guitar or iOS guitar, as it’s becoming known, eliminates the need for any external hardware to record your tracks. Remember having to buy a Pre Amp in order to run your guitar into your computer’s audio editing software? I bet you do, because you’re probably still doing it just like I am. However, the USB guitar features a built-in Pre Amp, which allows you to literally plug the guitar directly into your Mac, PC or any other iOS device such as an iPad. 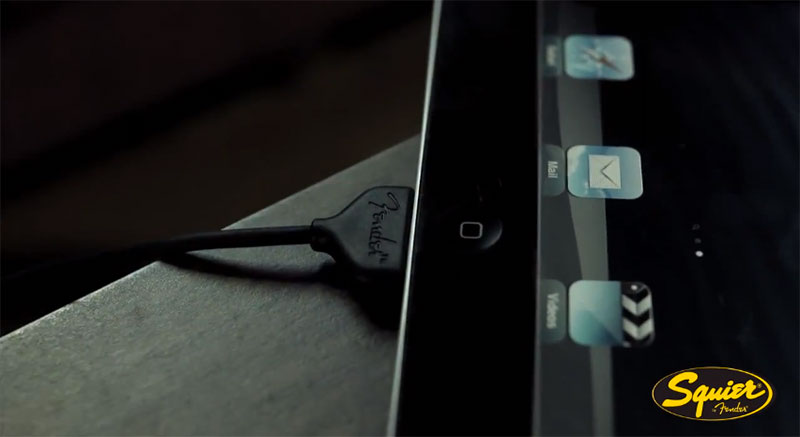 Of course you can’t just plug 1/4″ cord into your computer, as they don’t have that input! You will need a 1/4″ to USB adapter cable, which comes with the guitar package. Along with that cable comes a few other necessary cables and a user manual.

The USB guitar looks just like any other Strat that fender produces however the build is questionable. Neither the Fender product page or Apple product page mention anything about the different woods used for the guitar. They merely boast the features and convenience of the Squier, not the specs. It’s probably an Alder body, like most other Stratocaster.

As you can see, the USB guitar by Squier features more than just your standard 1/4″ jack, which though not in the image, is on the side of the guitar. She also features a headphone jack and a mini USB port. Among the different controls is also a headphone volume control. This means no more pissing off the parents by “needing” to use your amplifier for whatever reason.

With the $199 price tag, this guitar is made extremely affordable and versatile.  I would be very interested to hear from any of you guys who have played one. I’d like to know how they play, feel, sound, etc…  What are your thoughts? Is this a breakthrough or a waste of technology? I kind of think that the music in the video wasn’t quite the set up used for the commercial track. Seems almost too nice to be true, you know? What do you think? Possible false advertisement? Or just a genuinely solid instrument? Please leave comments in the comment box below.

**All Images of USB Guitar courtesy of Fender.com. Visit for more information.

Have you ever wondered why your guitar has frets? If you’re reading this post, END_OF_DOCUMENT_TOKEN_TO_BE_REPLACED