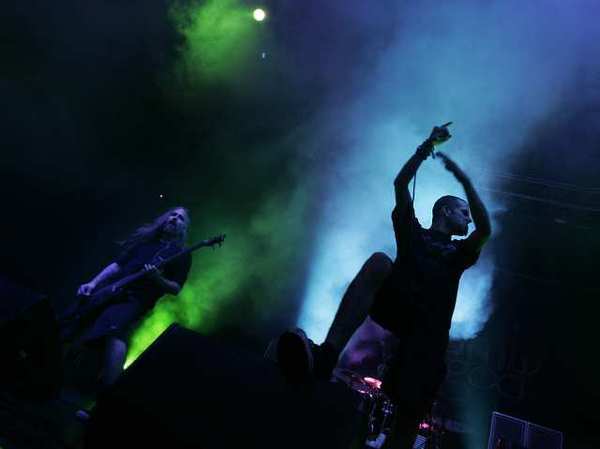 Recently the metal band was forced to announce a cancellation to the rest of their 2012 tour. Fans will now have to wait even longer to see them play live again due to singer Randy Blythe’s continued captivity in Czech prisons. The tour, scheduled to be with Dethlok was cancelled July 26th, just a few days ago. Having used to love Lamb of God and recently gotten back into them, this is seriously disappointing.

So What Happened with Randy Blythe?

For those of you who don’t really know the whole story with what is going on, here’s the deal. Randy Blythe was arrested several weeks ago for Manslaughter. When a fan rushed the stage at a show in the Czech Republic Blythe pushed the fan away while the security guard, behind the fan, THREW the guy into the crowd. The fan then later died weeks later due to head injuries sustained from the throw. Honestly I think this is more of an act of the Czech government trying to slowly dissipate the metal community or at least common behavior at the shows. Call me crazy, but it just doesn’t add up.

Randy Blythe was originally given a bail posted at $200,000. It was paid promptly, however Blythe was not released. They then held him in jail with a bail doubled which the band quickly got together. Prosecutors however, are stating that Blythe is a “flight risk”. Are they serious? They think that Randy Blythe is gonna pull some Turbulence (movie) style shit when he’s being flown back home? That’s just plain ludicrous. I’ve also heard word spreading about the though of a conditional release for the Lamb of God frontman.

These conditions giving Blythe two possible options. The first, he can be released but is not allowed to leave the Czech Republic. Or the second, he is to be given a predetermined location to live in in the states. Blythe would not be allowed to leave this location. Should Randy ever decide to violate the terms of these conditions an International Warrant from his arrest would be issued.

Now how fucked up is that? First he posts bail, they just double it. They insult the man for barely defending himself. Now they’re pretty much contemplating ruining his career over the incident. No wonder “Free Blythe” shirts are starting to surface everywhere. What’s your take on this? Should Blythe be locked up right now? If so, is the extent it’s being taken necessary? Did the fan have that type of response coming? Leave your thoughts below.

Have you ever wondered why your guitar has frets? If you’re reading this post, END_OF_DOCUMENT_TOKEN_TO_BE_REPLACED