How to Play Power Chords on Guitar: Your Intro to Rhythm Guitar

Power chords have been a staple in rock and later metal music since the 60s. They have been used in some of the heaviest riffs out there, and for good reason: they sound awesome! In this lesson you will learn how to play power chords on guitar.

In this lesson, we will also be covering the theory behind power chords. Since power chords are specific to guitar, it’s important to know what makes a power chord a power chord so you can easily communicate with other musicians. 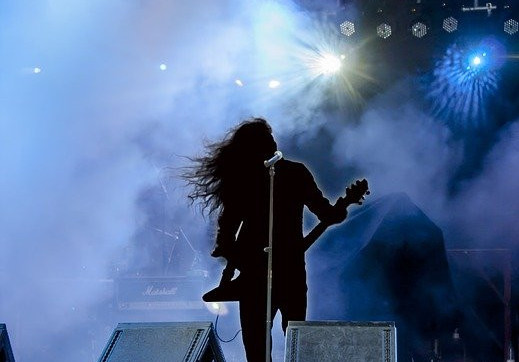 What Is a Power Chord (Theory)

A power chord, also known as a “5 chord”, is a 2-3 note chord. Power chords are also referred to as 5 chords because the 2nd note of the chord is the 5th note in the root note’s major scale.

For example, an E5 power chord would have an open low E string (i.e. an E root note) and then the 5th note in the E major scale is a B note. Therefore, your E5 power chord is played with an open E and the A string fretted at the second fret. 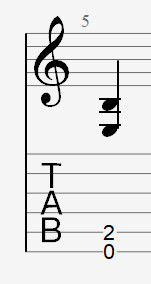 Occasionally you will hear power chords referred to by their root. For example, an E5 is also known as a “E Root 6” power chord, since the root is on the 6th string.

Now that you’ve got a basic understanding of the theory behind them, let’s learn how to play power chords on guitar!

What’s great about open string power chords is that they can be played with just one finger. You’ll notice on the TAB power chord examples below that the notes are stacked on top of each other. This means you should play both strings at the same time, just like a guitar chord.

If you’re unsure about reading TABs, I highly recommend my lesson on How to Read Guitar TABs and Chord Charts

Your open chord power chords are:

For an E5 power chord simply put your index finger down on the 2nd fret of the A string and play just the low E and A string.

Tip: Use the string below the last string you play as a “stopper” for your pick. For example, for an E5 power chord, you would use the D string as your “pick stopper” to prevent you from playing any unused strings. 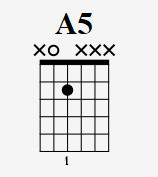 An open A5 power chord is very similar to an E5, except played 1 string down. For an A5 power chord, fret the 2nd fret on the A string and play the A and D strings together at the same time. For this power chord, you would use the G string as your “stopper” string.

Because of the way the B string is tuned on a guitar, the G5 power chord shape is played by fretting the 3rd fret of the B string and an open G string.

Compare this to all the other open power chords, which fret on the 2nd fret.

How to Play Movable Power Chords

An easy way to remember the shape necessary for movable power chords is that your 2nd note will always be 1 string down and 2 frets up the neck from your root.

For example, your F power chord is played with your index finger fretting the root note (F) on the low E string, and the 5th of the F scale ( C ) on the A string. Just like with open power chords, you’ll notice the name of the movable power chords is dictated by the root note.

For G string power chords you will always play the 5th one string down, three frets up the neck. Again, this is because of the way the B string is tuned on the guitar.

Once you go down to B string movable power chords, go back to using the 1 string down, 2 frets over shape.

Are you ready to take your power chords to the next level!? Let’s add an octave!

You’ve probably seen people who play 3 string power chords, by adding a third finger below the 5th of the chord. This third note being added to the chord is actually the octave of the root note. Meaning, it is the same note, just 1 full octave higher in pitch.

Adding the octave to the power chord does a couple things: First, it gives the power chord a much “fuller” sound to it. Second, it makes your power chords sound mean and more aggressive. Who doesn’t want that?

There are also a couple different ways to add the third note to your power chords. The first and easiest, way is to add your third (ring) finger below the 2nd (middle) finger, 1 string down, on the same fret.

The second way to fret a 3 note power chord is to barre your 2nd and third notes. I’ve seen people barre the notes with their 2nd or 3rd fingers. Personally, I find using my 3rd finger for the barre more comfortable.

Neither of the above ways to play a power chord are right or wrong, they are all about preference. Though I will say you may have a tough time barring if you’re a beginner.

Note: For most octaves the third finger goes right below the 2nd finger, however not this is not always the case. Can you guess where this is going? 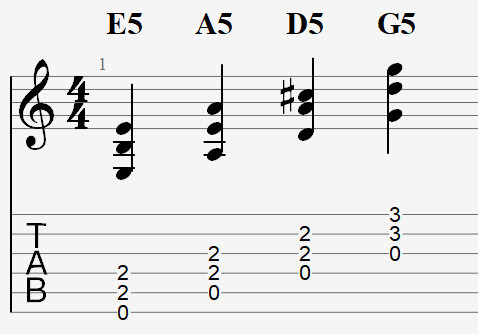 Tip: When playing power chords, do not lift all of your fingers up if you are staying on the same root string. This saves effort and makes transitions much easier.

If you're looking to get a good guitar tone, adding palm muting to your power chords will make them sound much cleaner, and often much heavier. Let’s look at how:

First, you want to try to palm mute all the open strings that you aren’t playing. Couple this technique with the “stopper string”, and the no-finger-lifting tips we discussed before and your riffs will sound 10x better than they did before this lesson.

How to Palm Mute in 30 Seconds

Rest the edge of your picking hand gently against the edge of the guitar’s bridge and strum. Try varying degrees of pressure with the palm’s edge to see how it changes your tone.

Also, try experimenting with where you rest the edge of your palm to see how that also changes your tone.

Getting a feel for this will really help you in developing your own personal guitar tone. A lot of folks think your tone is in the gear, but your tone really stems from your hands first.

Adding Palm Muting to Your Riffs

The next way to add palm muting to your power chords is to palm mute the chords themselves. Palm muting a power chord gives it a much chunkier, chug of a sound.

Experiment adding and removing palm mutes to your power chords and get a feel for how it changes the rhythm of the riff. Palm muting is great for establishing rhythms. For example, try palm muting your first 3 power chords, then not palm muting the 4th. See what I mean?

Depending on how low the action of your guitar is it will be harder to mute the unused strings since it takes much less force to fret the notes and therefore stray notes are more common.

The best ways to mute any unused strings are:

It is very important to practice and incorporate all the above techniques into your playing if you really want to have a crisp, clean tone and your power chords to sound as brutal as possible.

If you enjoyed that lesson preview, check out this FREE JamPlay lesson:

Wrapping It All Up

By now, you know how to play power chords on guitar, as well as how to move them up and down the neck and the theory behind them. You have a solid enough understanding to apply power chords to your own riffs and to play them with other musicians who may not be guitarists.

Did I leave anything out? Are you still hazy on how to play power chords? Leave any questions or comments you may have down in the comments below and I’ll get back to you ASAP (usually within 24 hours).

Fender: What Is A Power Chord?

Have you ever wondered why your guitar has frets? If you’re reading this post, END_OF_DOCUMENT_TOKEN_TO_BE_REPLACED