How to Play the C Major Guitar Chord

In today’s lesson, we are going to learn how to play the C Major guitar chord.

The C major chord is one I teach my students early on since it is easy to play, has a nice full sound and it sets the easiest starting point for learning music theory. C major is also one of the 6 main guitar chords beginners should learn.

C major is a great key to learn early as there are no sharps or flats in the key of C. More on that in a bit.

How to Play the C Major Guitar Chord 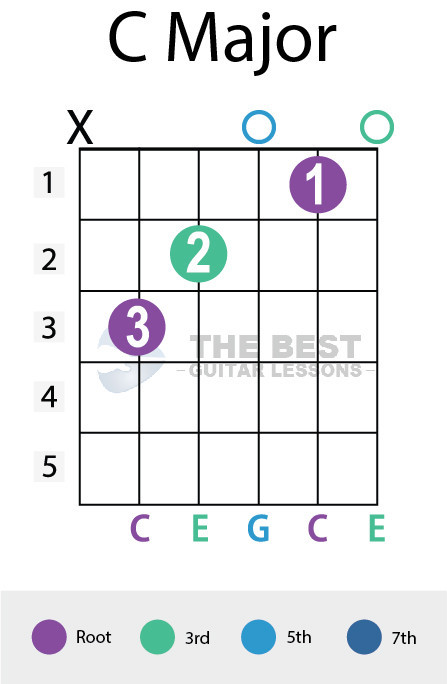 If the above chart is foreign to you, check out our lesson on How to Read Guitar Chord Diagrams.

For the C Major guitar chord, you want to strum every string except for the low E string.

Focus on bending your fingers into an arch and only playing the strings with your fingertips to avoid muting strings that should be ringing out.

This chord is an early introduction to reach skills and requires a little more stretching of the third finger than you may be used to. It’s okay if it takes some time, just stick with it and focus on your hand shape.

Chords in the Key of C Major

Read More About the Key of C Major Where to Go From Here

Learn How to Strum on Guitar

Leave any questions or comments below and I'll get back to you ASAP (usually in 24 hours or less).

Have you ever wondered why your guitar has frets? If you’re reading this post, END_OF_DOCUMENT_TOKEN_TO_BE_REPLACED